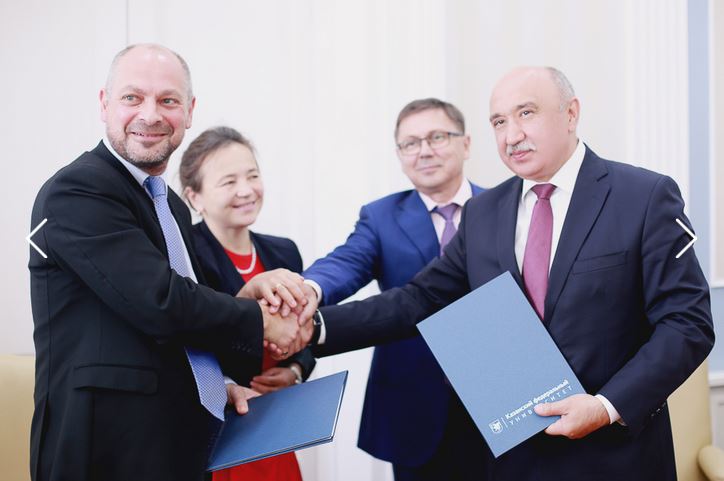 The signing occurred at KFU on August 31st.

Cochrane Russia was established at KFU in 2014 and was soon assigned as the national coordinating center for Cochrane. The sides have since launched two master programs (in evidence-based medicine and pharmacology), held several international conferences and schools, and published many systematic reviews. However, even more is in store for the partners now.

Mark Wilson thanked the Rector for his active support and participation which fostered this fruitful cooperation. He said that the work has been maintained with minimal resources and that he expects many new things thanks to the latest agreement. Cochrane Russia, as he emphasized, is a necessary link which helps regional medical facilities make weighted decisions with the support of evidence-based medicine.

It is now time to spread Cochrane principles to Tatarstani and Russian healthcare systems. Dr. Gafurov opined that this can be done straight from the student bench, “As you have mentioned, Cochrane is in many ways a pioneer in healthcare. That’s why we find it relevant and important for future decision-makers to adopt Cochrane principles starting during their student years. We would like to pay special attention to such details in our joint curricula; that would be beneficial for Russian and international students alike”.

The University may thus serve as a messenger for Cochrane principles outside of Russia as well. Moreover, there is now a medical cluster where new knowledge can be implemented.

Dr. Wilson had this to say, “We assume that this step will be a new chapter in developing evidence-based medicine, not only in Russia but in the world, because researchers’ efforts can be useless without appropriate reaction from healthcare authorities. The development of our associated center at KFU will serve as a good boost for Cochrane principles in Russia. For Kazan University, on the other hand, cooperation with Cochrane can make it the center of the global community of academic and clinical research in evidence-based medicine and healthcare”.

All of the abovementioned points are reflected in the new agreement. It is aimed at developing medical and pharmaceutical education and research for the innovative economy and society, as well as raising KFU’s global competitiveness.