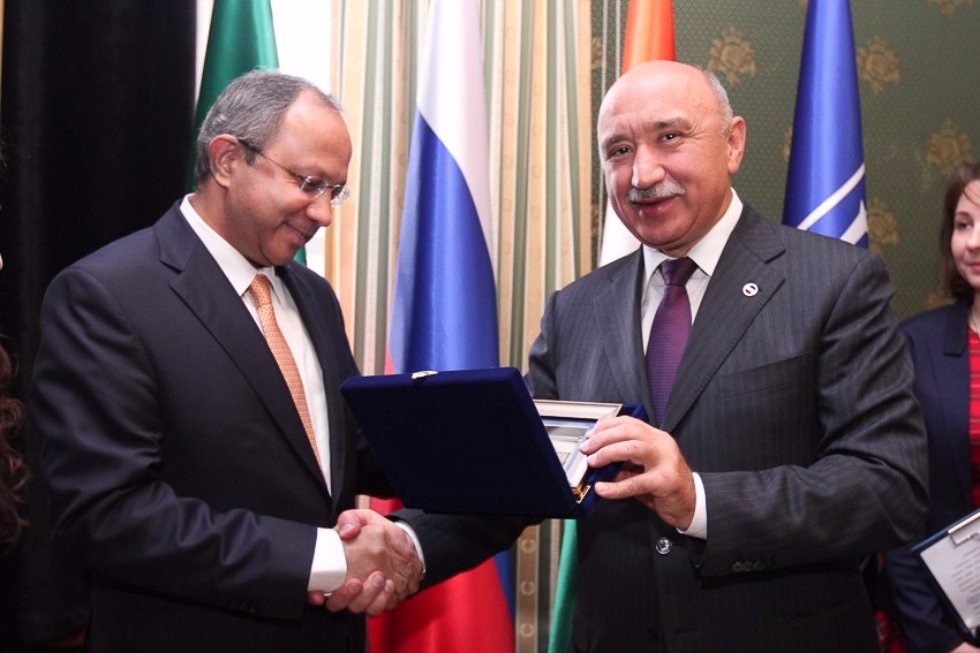 A sizable delegation of Indian officials and businesspeople were at KFU on November 14th.

Ambassador Pankaj Saran came to Kazan for the first time with what he called «a mission of peace and kindness». During the brief two hours of the visit he met with KFU’s management and academics and gave a lecture for the students.

Rector Ilshat Gafurov said that Kazan University first started contacts with India in 2012. Naturally, that has mostly pertained to student admissions. There are currently 53 Indian students, all of whom study medicine in English. The University plans to attract Indian youth to the other majors. The Rector emphasized KFU’s attention to practice and research work at its numerous labs and test production facilities.

The Ambassador pointed out two of the main cooperation directions that are likely to benefit both sides. Firstly, he suggested that Kazan University actively take part in the activities of the Russian-Indian Association of Universities. Secondly, there is now a new program established by Indian government; it can facilitate the Russian academics’ participation in joint research projects. The grants are for 1 to 3 months of work.

New horizons in petroleum industry have also become visible, and this area is a traditional strong suit for Kazan University.

In general, as Ambassador Saran noted, the last 18 months of intergovernmental cooperation between India and Russia have been as productive as the previous 20 years. Suffice it to say the meeting between President Putin and Premier Modi during the BRICS summit in October 2016 was marked by the signings of 19 significant treaties and contracts.

After the meeting Pankaj Saran proceeded to present his lecture to the students. He spoke briefly about India and its relations with Russia. He stressed, in particular, that India is a very young country (65% of the population are below the age 25) and has huge potential. The country, as he also said, is famous for its diversity of ethnicities and cultures and resembles Russia in this regard. The Ambassador expressed his delight with the quickly growing cultural and technological cooperation between our two countries.

The students then asked several questions, one of them – much to the pleasant surprise of all of the visitors – in very good Hindi.