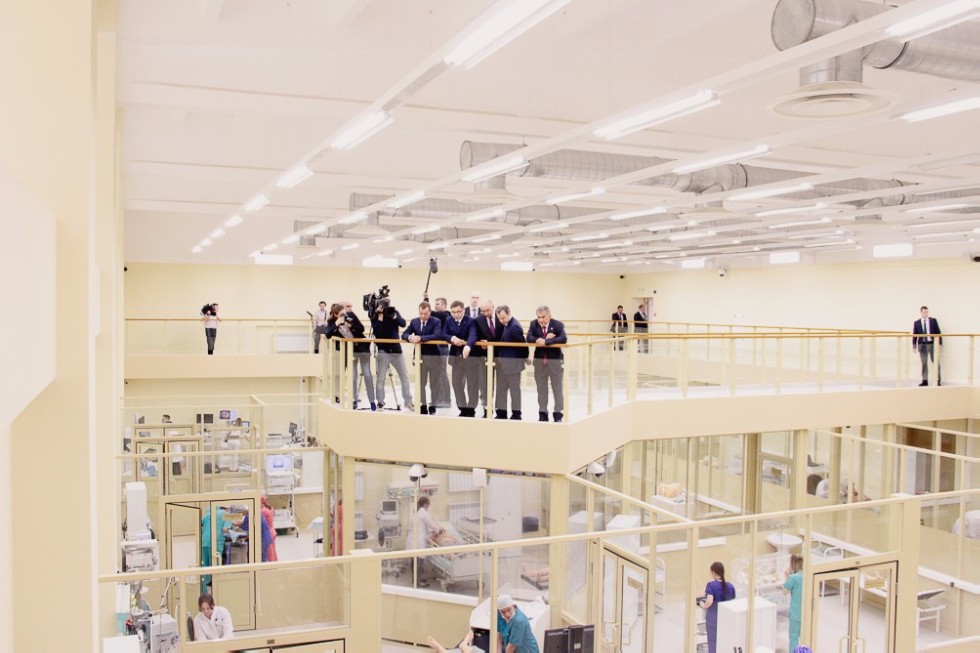 He was accompanied by a number of high officials, including federal Minister of Education and Science Olga Vasilyeva.

The delegation’s first stop was at the KFU IT Lyceum. Rector Ilshat Gafurov showed the guests around the facilities, including classrooms and dorm rooms. He then presented the University’s history and present and touched on what development programs have brought, “In order to be competitive in the global environment we have concentrated our efforts on five key priorities – one of them is IT, something that is taught here starting from the secondary school level. They all correlate with the governmental Strategy of Scientific and Technological Development. They were chosen according to the demand that they have with business and the society; they are also heavily integrated and interdisciplinary”.

Meanwhile classes at the Lyceum continued as usual. The visitors were able to see and even partake in some of them. When Minister Olga Vasilyeva appeared in the astronomy class, the teachers there specifically thanked her for lobbying the return of this discipline to the general school curriculum. She reacted, “I think that the country that first endeavored into space can’t not study astronomy in school. Right now we are building three more observatories where schoolchildren will be able to study our Universe”.

While at the Lyceum, Prime Minister Dmitry Medvedev made use of the opportunity to greet the pupils and extend his best wishes, “You have a very nice lyceum. I must say that you are very lucky to study at such a place – you can acquire fundamental knowledge, find friends for the rest of your lives, and prepare to enroll in a university. Many of you are celebrating their final day of studies today, a prom day, and I sincerely congratulate you and wish you the fulfilment of all your dreams during the next stage of your lives. One of them has already come true – you have received excellent education which will definitely be helpful”.

After that the whole procession moved to the Institute of Fundamental Medicine and Biology. They looked at the equipment at the virtual clinic and the simulation development facility. KFU executives used this part of the visit to explain how fundamental knowledge at the University transfers to practice, in this case at the University Clinic.

Later in the day Prime Minister talked to young scientists of KFU. Joining him were Minister Vasilyeva, Rector Gafurov, President of Tatarstan Rustam Minnikhanov, and relevant government employees. The discussion focused on the young researchers’ ambitious projects, as this directly corresponded with the Prime Minister’s main objective – presiding over a meeting of the Presidium of the Council on Economic Modernization and Innovative Development of Russia.

Before starting the meeting itself the Prime Minister shared his impressions from what he had just witnessed at KFU, especially the Medical Simulation Center, “I have never before seen medical students having the opportunity to practice with the use of such high-level medical equipment during their studies”.

Medical simulators figured in one of the proposals formulated during the discussion. Mr. Medvedev noticed that most simulation centers are equipped with imported equipment (and that is reflected in their technical regulations), while some of the national research facilities have the wherewithal to produce their proprietary robots. KFU has had such an experience, but not always there are the conditions to move those products to the market. So the regulations must be changed in order to include Russian equipment. In their turn, the gathered young scientists spoke about some common complications in their work that arise on different occasions – from grant applications to patents and market activities.

To this the Prime Minister answered, “Our higher school is often criticized, but we cannot deny that we have progressed significantly and made our name heard on the global level. However, if within the academic community, among universities there is good communication, and everybody in scientific circles knows about their colleagues’ achievements, between the business and the innovation community there are no contacts, basically zero information, and that’s a big problem”. Creating such an information flow must become a priority task.

The Prime Minister announced that KFU will become a pilot institution for a new student entrepreneurship program; the federal government plans to allocate 30 million rubles for the launch. Some other universities will join in. Mr. Medvedev also emphasized the importance of the already obtained results. He wished everyone fruitful research work and new breakthroughs.

The Council meeting then followed; among other points on the agenda, some of the questions raised by the KFU employees were discussed.

In his introductory speech the Prime Minister said, “We have gathered at Kazan Federal University. This is a large and serious educational complex. I have visited various educational institutions today. First I visited the IT Lyceum where kids who are interested in new technologies prepare for scientific work. I got acquainted with the infrastructure that has been built up at the Institute of Fundamental Medicine and Biology. All that makes a very good impression”.

He mentioned that universities as a whole are subjects or very close attention. 114 billion rubles have been invested in this system in the last 10 years. The PM talked about the Universities as Innovation Center Program which is aimed at boosting the universities’ global competitiveness.

Small innovation companies, which commercialize research results, were mentioned. Over 3 thousand such entities have been established since 2009, and 90% at universities. “In order for the startups to be more successful one needs to understand he potential demand. And the demand is better understood by industrial companies. They not only must regard students as their future employees but also trust university project teams to solve technological tasks. This is what students have just asked me about”, he continued. In particular, within the megagrant program 200 labs have been established in the last five years with over 5 thousand employees; 50 engineering centers have received about 3.5 billion rubles of investment.