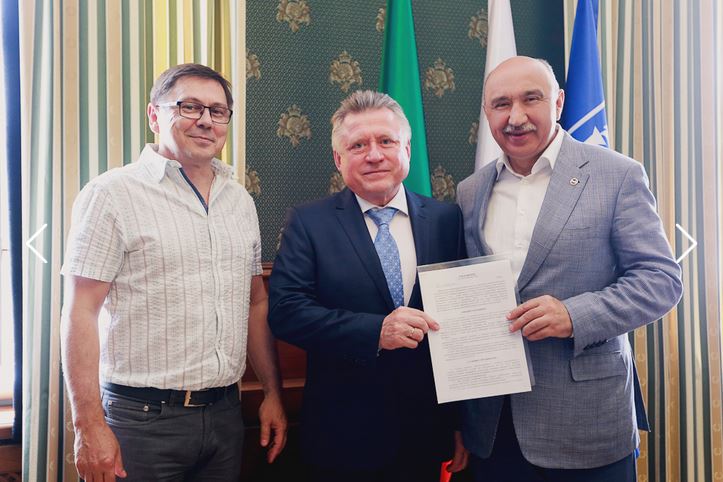 Chairman of the company Navin Saxena arrived for negotiations on June 28th.

This was a continuation of the recent visit by the Russian area manager of Rusan Pharma Ashok Kumar.

After visiting the facilities in the central campus and at Belomorskaya Street Dr. Saxena met with Rector Ilshat Gafurov and KFU representatives. Dr. Gafurov spoke briefly about the University’s recent history and the University 3.0 strategy. He also mentioned a joint meeting of Russian Union of Rectors and Russian Academy of Sciences in Moscow on June 27th. That meeting resulted in the participants deciding to push for more tight integration of educational and research institutions for mutual benefit.

Dr. Saxena replied, «I have been in the pharmaceutical business for a long time. Our company is private, and we choose our partners meticulously because we receive no subsidies and have to work amidst strong competition».

The guest expressed praise for the infrastructure of the KFU’s pharmaceutical cluster but noted that scientists have to pay more attention to existing businesses, in particular by studying the structure of functioning production lines. A new KFU-Rusan Pharma research and education center will help in that as well. The center will be formed under the aegis of Pharma 2020 program.

Director of the National Public Health Institute Ramil Khabriev said during the meeting, “The potential here is not only a research center as a part of the pharmaceutical cluster. After seeing KFU’s labs Dr. Saxena suggested establishing a production line in Kazan. He already has one such center in India, and it works like a charm”.

The sides may expand their cooperation after this first stage if everything goes smoothly. Rusan Pharma produces pharmaceutical equipment as well, including grinders, planetary mixers, driers, and chemical reactors – something that can be of interest for the KFU Institute of Engineering.

The launch of the new research center is set for 2018.