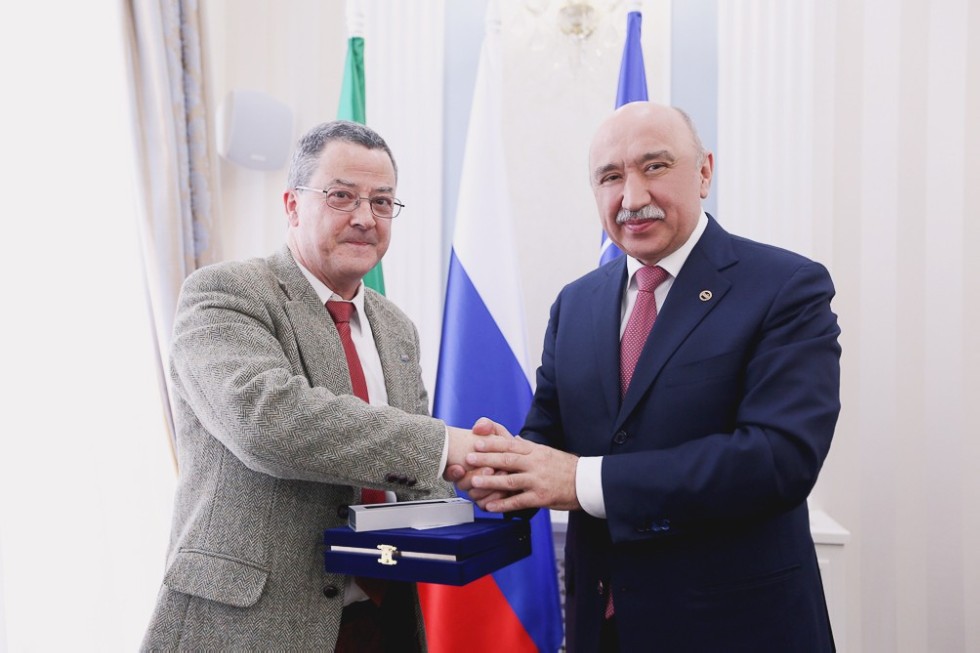 The Ambassador met with Rector Ilshat Gafurov and KFU staff on 24th April.

Rector Gafurov started the meeting with a traditional presentation which included brief overviews of KFU’s history, current developments, and priority research areas. As of now, the University has ongoing cooperation with Swiss partners in some of them. Notably, Izvarino Pharma, a subsidiary of Ferring Pharmaceuticals, is ready to start medication production with KFU. Digital Media Lab, a joint effort with the Federal Polytechnic School of Lausanne, successfully works in both education and science, producing various 3D and virtual reality software.

The Ambassador invited all the interested young people to more actively pursue Swiss governmental grants for postgraduate researchers. Russia is one of the priority selection countries in this program. The Rector answered that it will be welcomed at KFU in case the programs correlate with the University’s priorities.

The talks also touched on international comparisons. Ambassador Rossier said, “We have two federal universities which are much like yours – in Lausanne and Zurich. When we were relatively low in the global rankings, we made a difficult decision to transfer to English instruction and research, and now, 20 years later, we are among the top universities. I think this experience is a necessary prerequisite for a university to attract top talent. Can one study in English at Kazan University?”

The Rector answered, “You said you had twenty years to advance. We have had only five years so far. Basically, we started working as a united university in 2013. During this period, we have opened new areas and have got close to formats used by top universities. We are ready to provide English instruction, and there already are several such programs, including full bachelor courses at the Institute of Fundamental Medicine and Biology. IT specialists conduct their work in English. Of course, English is the language of science. Legally, though, we cannot transfer to English completely; everything has to be by students’ choice.”

Ambassador Rossier could later confirm whether or not students are really ready to communicate in English. After the negotiations, he presented a lecture called “Russia and Switzerland in Europe.” Future diplomats and researchers discussed some issues of particular interest with him.